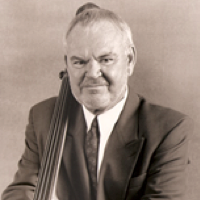 Chuck Berghofer, one  of LA’s finest bass players, has had a varied career as a jazz musician and studio artist. He has performed with Ella Fitzgerald, Peggy Lee, Mel Torme, Sarah Vaughan and more recently with Christina Aguilera, Michael Feinstein and Steve Tyrell. Two of his biggest hits were his bass solo on Nancy Sinatra’s “These Boots Are Made For Walking” and the “Barney Miller” TV theme.

Charles Curtis Berghofer, 14 June 1937, Denver, Colorado, USA. Born into a musical family (his grandfather had played with John Philip Sousa), Berghofer began playing trumpet at the age of eight, by which time his family had moved to California. He played various other brass instruments before turning to the double bass in his mid-teens. An admirer of Ralph Peña, he persuaded the older man to give him lessons. Two years after taking up the bass, Berghofer joined the orchestra led by Skinnay Ennis for a Midwest tour. He then joined pianist Bobby Troup where he remained for a number of years accompanying the pianist and his wife, singer Julie London. He replaced Peña in a duo with Pete Jolly, the group later expanding to a trio with drummer Nick Martinis, and then, in 1960, became a member of Shelly Manne’s house band at the drummer’s newly opened club, the Manne Hole. During the early 60s, Berghofer played with numerous leading jazzmen, including Jack Sheldon, Conte Candoli, Frank Rosolino, Rahsaan Roland Kirk and Philly Joe Jones.