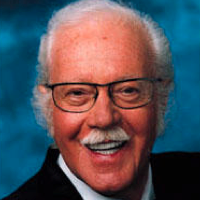 In a world where fame and notoriety can come and go like flavors of the month, Ralph Carmichael is an enduring presence. As an arranger and conductor, he’s shaped the music of many of the biggest names of modern pop music. As a writer, producer and record executive, he was one of the driving forces in the creation of contemporary Christian music.

Ralph, a pastor’s son, was born in Quincy, Illinois and moved, as a child, to North Dakota, where his father took another pastorate. In his early teens Ralph moved to Southern California, where he has resided ever since.

Ralph grew up with music in his home, as his father played trombone and very “undignified” ragtime piano. Wanting to make sure his son had the kind of lessons and private training he had been denied as a child, his father started Ralph on violin lessons before he was four years old. Over time, piano, trumpet, and voice lessons were all added to his repertoire.

Committing his life to Christ at age 17, Ralph finished high school and went on to Southern California Bible College (Vanguard University). Though his academic studies were shaky, at best, his musical talents began to flourish. “I flunked Greek and Hebrew,” he recalls, “But I was always organizing vocal groups and orchestras.”

Immersed in the traditional music of the church, Ralph also kept one ear on the pop and big band music that was the rage of the day. While still in school, Ralph recorded a local weekly TV show called The Campus Christian Hour. The show, which featured Ralph and band playing big band arrangements of Gospel standards, ran for over a year and won an Emmy Award.

Ralph spent five years as minister of music at a Los Angeles Baptist Church where he wrote the classic hymn, “The Savior Is Waiting.” Ralph had also begun writing film scores for World Wide Pictures, the company that produced full-length feature movies for the Billy Graham organization. Ralph composed scores to many successful films, including “Joni”, “For Pete’s Sake” and “The Restless Ones.”

Recording much of his work in the Capitol Records studios in Hollywood, Ralph soon came to the attention of executives in that company who wanted him to do arrangements for their artists, as well. Ralph’s resume includes work with many of the biggest names of that day, including Pat Boone, Rosemary Clooney, Nat King Cole, Bing Crosby and Ella Fitzgerald. Ralph composed music for such popular television shows as “I Love

Lucy”, “Roy Rogers & Dale Evans”, and he also had a long time association with pianist Roger Williams for whom he scored the million-selling smash, “Born Free”, which continues to sell today.

“The direction that my life has taken has been exactly what God wanted for me”, says Ralph. “I had no formal music education, so all of the work I did in the secular field was my education. I would learn things by writing in the secular field, and then I would take them and apply them to gospel music. It didn’t seem worldly to me. It fit perfectly into praise and worship music.”

As the rock revolution took hold in the ‘60’s, Ralph wanted to write something his teenage daughter could relate to. The results were a number of classic church musicals. Built around modern folk and folk/rock instrumentation, the Carmichael musicals almost single-handedly introduced contemporary music into the church.

Carmichael formed Light Records/Lexicon Music to be a vehicle for this new musical genre he had helped to create, which would come to be known as contemporary Christian music. Light went on to sign and launch the careers of some of the pioneers of Christian music, including Andrae Crouch, the Winans, Dino, Reba Rambo, Rez Band and Bryan Duncan.

2007 marked Ralph’s 60th year in Christian Music, and he is just as active today as he was 60 years ago. His Big Band album, “Ralph Carmichael and Friends Live” was recorded at his Alma Mater, Vanguard University. It features big band gospel performances by Larnelle Harris, Dave Boyer and Sharalee.

Ralph’s Brentwood Records release, “Strike Up The Band”, won a Dove Award for Instrumental Album of The Year. Ralph toured as the musical director for the Young Messiah tour which ran each Christmas Season from 1990 through 1996. He also was conductor for the Emmanuel Tour which included artists such as, Michael W. Smith, Larnelle Harris, Anointed and Clay Crosse. But with all his successes and accolades over the years, Ralph Carmichael has never lost sight of his source.

“My inspiration over the years has just come from my personal experience”, says Ralph. “Loneliness, pain, anguish, and sorrow – I’ve experienced all of that. And when I write about the amazing strength that comes from experiencing God’s love, I know that on a daily basis. I don’t know how many notes I’ve got left in my pencil, but I know I want them used to glorify God and present His message to the world!”

Most recently, Ralph recorded two albums of favorite hymns with the London Symphony Orchestra and Choir.