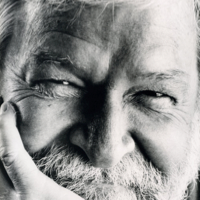 Willis Holman (born May 21, 1927), known also as Bill Holman, is an American composer/arranger, conductor, saxophonist, and songwriter working primarily in the jazz idiom.  Although he has performed and recorded as a tenor saxophonist, Holman is best known as an arranger. Through his acquaintance with Gene Roland, Holman was auditioned by Stan Kenton and hired as a tenor sax player around 1951.

“Bill Holman’s compositions and arrangements are both experimen­tal and basic at the same time; they never for one moment cease swinging, and yet their rhythmic complexities are brilliant. His har­monic sense is quite daring at times, and still his changes are com­fortable and logical to play on. All his pieces have form and definite orderliness; they have strength and an underlying feeling of ‘There’s something left in reserve, this isn’t the climax yet.”ANDRE PREVIN August 12, 1958